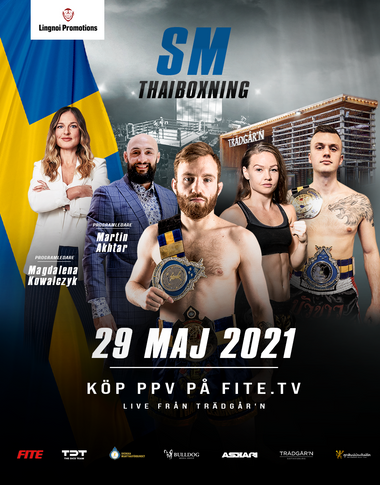 Lingnoi Promotions presents the Swedish Muay Thai Championships which is one of the most spectacular fighting-events in Scandinavia. Sweden is one of Europe´s largest muay thai nations that annually brings home medals with their national team at the World Championships and has professional fighters all over the world.

This is three-day event starting with the quarter finals on may 27, semi-finals on the 28th and ends with a spectacular fighting-show on may 29 live from Tradgarn, one of the largest entertainment venues in Gothenburg, Sweden.

Your hosts for the final evening are no other than Magdalena Kowalzcyk and Martin Akhtar. Nowadays Magdalena is well-known as an anchor on Swedish TV but she is also a former world muay thai champion, so she knows a thing or two about fighting. Martin Akhtar needs no introduction to the Scandinavian crowd has he has over 100 muay thai and mma fights and always acts as a gentleman and a true warrior. Our ring-announcer Ricky Wright is flying in from Wales to add some international flavour this amazing event. What a great team we have!

The Swedish Muay Thai Championships is aired only on FITE TV. Get your PPV today!

Location to be revealed in june 2021